I. What is Skale Network? 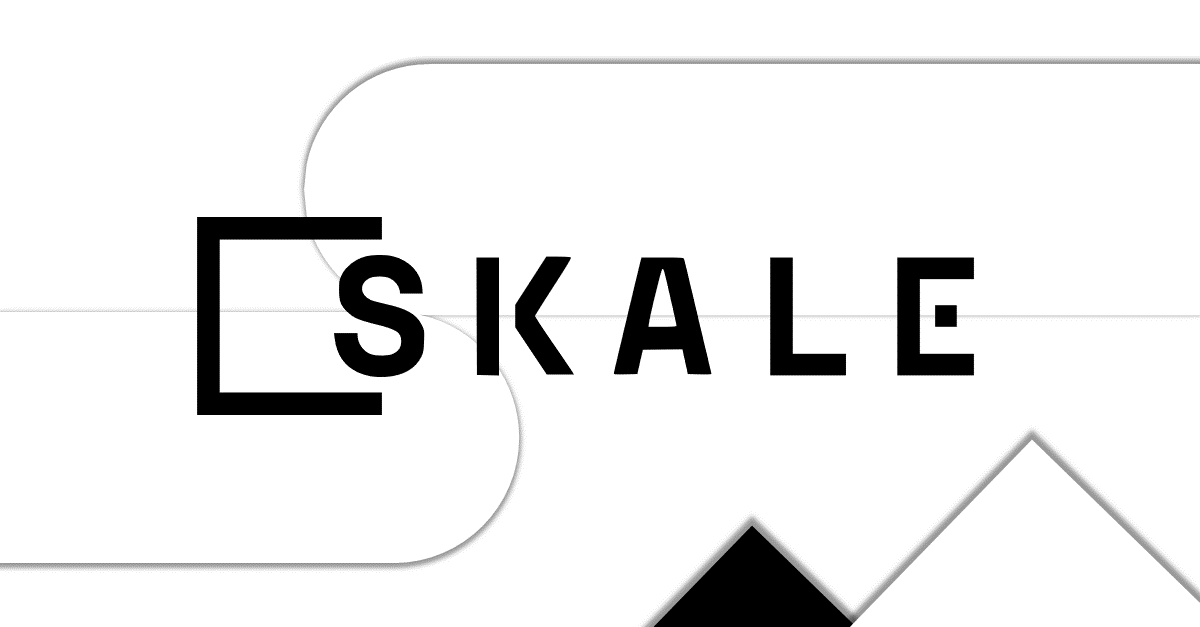 Skale Network (SKALE) is a Blockchain Protocol and a Side Chain of the Ethereum Network. Incorporating an EVM (Ethereum Virtual Machine) server enables Skale Network to design smart contracts with benefits like high transaction speed, low latency, safety, and developer-friendliness.

EVM is an acronym for Ethereum Virtual Machine, a full-featured Turing virtual machine responsible for facilitating the execution of Smart Contracts.

The objective of Skale Network is to create a method for creating Smart Contracts that are less expensive, quicker, and more secure. However, it also offers consumers a full feature set at the same time.

The NODE Foundation – Liechtenstein Foundation’s SKALE Network (SKL) project intends to advance the advancement of Web3 technology and improve the developer and user experience of the decentralized web. end users, developers, and validators.

In order to aid in the growth of the SKALE Network, the NODE Foundation collaborates with SKALE Labs as well as other top organizations and investors worldwide. San Francisco, California serves as the headquarters of SKALE Labs.

The following are some of the highlights of the Skale Network (SKALE) project:

To be able to deploy Smart Contracts on Skale Network, developers that wish to construct Dapps on the platform must first design an elastic sidechain.

The ability to throttle for this user is what enables the network’s resources to be utilized more effectively.

One SKALE Node has a Node Core and several Virtualized Subnodes, as we indicated previously.

The distinctive feature of this situation is that a Node is not always connected to an Elastic Sidechain. That Node’s Virtualized Subnodes will fork and utilize several Elastic Sidechains. The network becomes increasingly decentralized as a result.

In order to address the user experience, technical scalability, and cost challenges related to decentralized networks like Ethereum, the SKALE Network and SKL token have been developed.

The goal of SKALE’s design was to give developers access to application-specific architecture, which would improve both configurability and modularity. Currently under consideration is a decentralized, programmable, on-demand blockchain network that supports advanced analytics, high throughput, low latency, and low-cost transactions.

Participants are currently able to directly connect with various systems thanks to proposed message protocols. The system’s goal is to give developers access to Ethereum-as-a-Service by offering subscription services without requiring them to gas the decentralized network, allowing them to create and deploy blockchains with high throughput, EVM compatibility, byzantine fault tolerance, and proven storage.

Elastic sidechains that are compatible with Ethereum are used for blockchains. The byzantine and asynchronous fault tolerance protocols are being used by each proof of stake sidechain, which consists of nodes that stake SKL tokens on the Ethereum mainnet, to provide a highly flexible consensus mechanism.

Currently, Skale is made up of 2 main parts including Skale Nodes and Skale Manager: 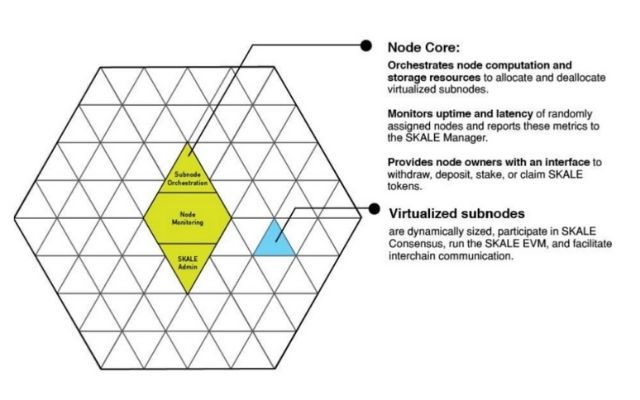 A Collusion-Resistant Leaderless Network is one of the 5 technological features of Skale Network and SKL coin.

The benefit of using fewer validator nodes than usual is that the network’s performance will improve. The drawback is that collusion between these nodes is simple, which makes transactions more difficult.

A pooled validation methodology, used by Skale Network (SKL coin), which mixes random node assignment with routine rotation, is used to improve this. cross-validators between nodes The name of this technique at the moment is Random Rotation Incentive Scaling. 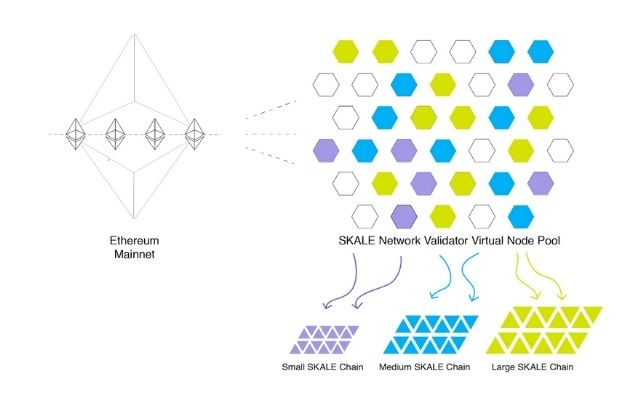 The SKALE Network (SKL coin) uses BLS signatures and a deposit box at the Ethereum mainnet as one mechanism to enable ownership and controlled use in the network. The non-storage approaches use a proof of fraud system to allow the transfer of assets between chains (this allows to take advantage of the security guarantees at the main network and achieve the performance inherent at Layer-2).

While other Layer-2 models attempt to execute verification through interactions with the mainnet, SKALE uses the Ethereum mainnet in a more integrated manner for staking and other crucial functions.

The project uses the Asynchronous Binary Byzantine Agreement protocol – ABBA in the hopes that the ABBA protocol would demonstrate its robustness in subnode downtime in order to make the greatest use of the combination of two protocols BFT (Byzantine Fault Tolerance) and DPoS.

In contrast to previous initiatives with the same goal, SKL coin and Skale prioritize the user experience. Because this project believes that requiring the user to go through numerous steps to confirm the transaction will be exceedingly difficult, expensive, and need a long wait for the price of ETH to rise, consumers will not add. As a result, the SKL currency and SKALE Network project are hopeful that these issues will be resolved soon.

5. The Friendliness of the Ethereum Ecosystem

What has been implemented on the Ethereum network is also possible on Skale’s network. The analysis of the SKALE Network and the SKL coin above indicates that programmers can create smart contracts entirely in the Solidity language of Ethereum.

As a result, these types of smart contracts work flawlessly with the EVM server and may be executed on Ethereum as well as the Skale Network from there.

Additionally, developers can now use Remix, Truffle, and networking through web3.py and web3.js on the Ethereum network. Additionally, Skale presently supports token specifications such as Dai, ERC721, ERC777, and ERC20.

In 2019, Skale introduced initiatives to expand the number of smart contract code developers on their project in order to introduce new goods and reward Ethereum developers.

Currently, Skale Network can be seen as Ethereum-as-a-service. A dApp pays a subscription fee based on the resources it needs (bandwidth, storage, and computing) from the Skale validator suite.

The SKALE Manager contract provides security for existing chains, which are further protected by a rotating group of validators who are assigned at random. StakedUS, ChorusOne, BisonTrails, and other early registered validators are also listed. 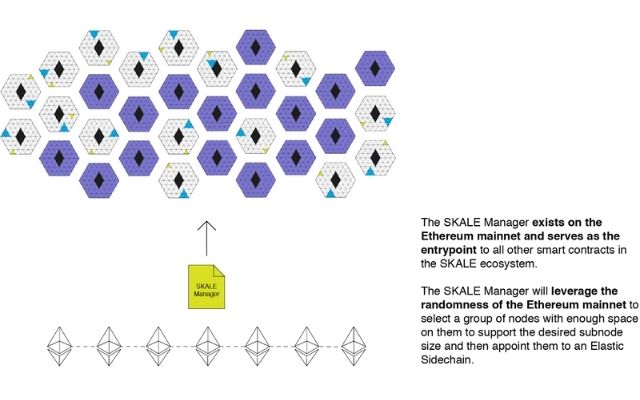 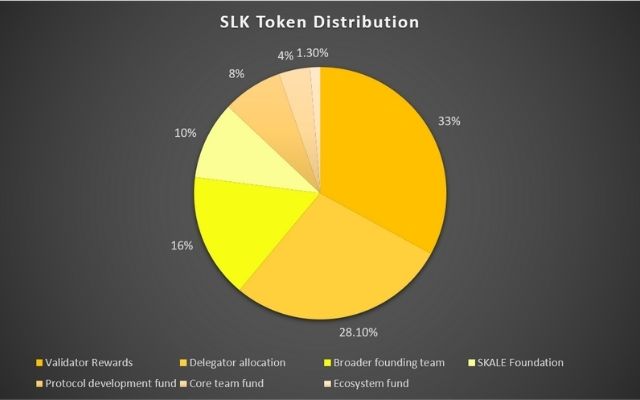 Following the launch of Mainet 1 in the final month of June 2020, the project had a lot of unexpected outcomes, with precise data attesting to the exceptional growth and more than 70 Dapps from various industries. is popular in the crypto realm, which also includes gaming, social media, and payments. Additionally, the ecosystem has grown, now including 40 partners.

Since the network’s formal debut in 2017, three mainnet phases have taken place, including:

The SKALE Token was first utilized with the following primary purposes, as per Team Dev’s design:

Skale Network is still in the development phase and is getting ready for the SKALE Token Sale.

Furthermore, customers can take part in purchasing using SKALE NetWork IEO. Alternatively, you can work as a Staker or a Validator and receive SKALE Tokens as a block reward.

VII. Which Crypto Wallets are suitable for SKL?

Some of the providers you can choose from smart wallets to store SKL:

It is obvious that Ethereum has been at the forefront in terms of developer traction and ecosystem integration. In a decentralized world, a strong, inclusive ecosystem is essential, but it’s more difficult to create and maintain than it is in a centralized one.

Open standards are crucial, and only safe and reliable technologies should be used. The influx of wealthy partners is evidence of the Ethereum developer community’s years of dedication and hard work.

SKALE Network is currently incredibly proud of the large community that supports it. Consequently, you can gain from the Ethereum stack’s interoperability. If they are successful with the aforementioned concerns, the future SKALE ecosystem will grow even more.

SKALE Labs now maintains its headquarters in San Francisco, California, and is a key team engaged in developing technical specifications and code development.

As a result, the following can be listed as the project’s principal participants: 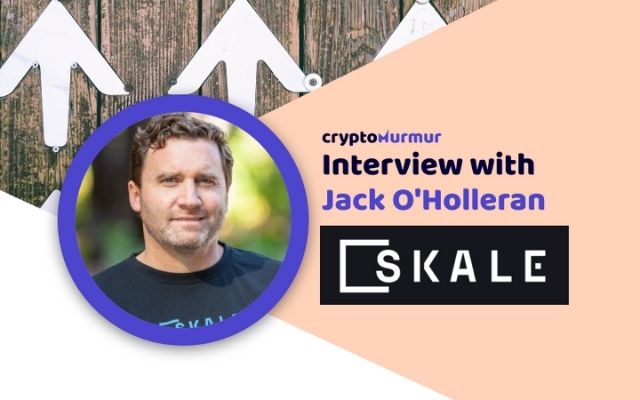 The project’s current CEO is Jack O’Holleran. He spent 15 years working for IT businesses in Silicon Valley and has a wealth of experience in the fields of machine learning, artificial intelligence, and security software. blockchain, mobility, and privacy.

Additionally, Jack O’Holleran is a co-founder of Aktana, a very sophisticated analytics platform that is currently employed by the majority of biopharmaceutical and technology businesses worldwide.

Jack O’Holleran co-founded IncentAlign in 2008, a platform for digital currency enterprise resource allocation that NASA uses. Jack O’Holleran was an executive director of Good Technology before that. Mobile security is a messaging platform.

Additionally, Motorola proposed to buy his company in 2006 for close to $500 million, and he began working with and investing in cryptocurrencies in early 2013. 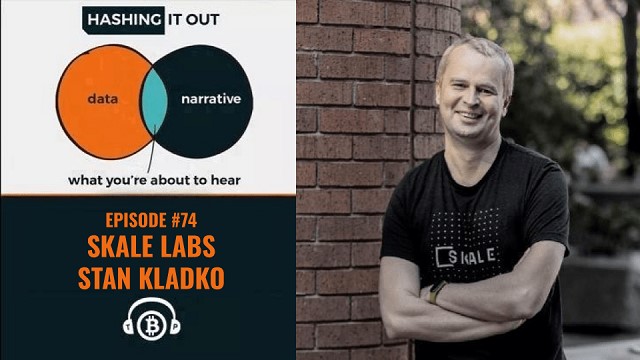 The project’s chief executive officer is now Stan Klakdo. In Silicon Valley, Stan served as chief technology officer for 16 years. has up to 18 years of cryptographic experience. Stan has also worked for start-up companies including Crypto Ingrian Networks and The Crypto Lab.

Before being a co-founder of SKALE, he was also a co-founder of Galactic Exchange and Cloudessa. He is a direct contributor and an active member of the Ethereum Research Foundation. He also has a PhD in physics.

Later in 2017, while the two collaborated to create decentralized applications, Jack O’Holleran met Stan Klakdo, co-founder of SKALE and CTO of SKALE Labs. As a result, both share the same issues with scale and user experience. Stan came up with the SKALE structure in this way, and it was at this point that the SKALE and SKL coins were developed.

The project’s partners in charge of the validator role can be mentioned as Ankr, BisonTrails, Figment, Staked, Delight, Stakin, Tuku, Stake the Future, VGC Ventures, etc. 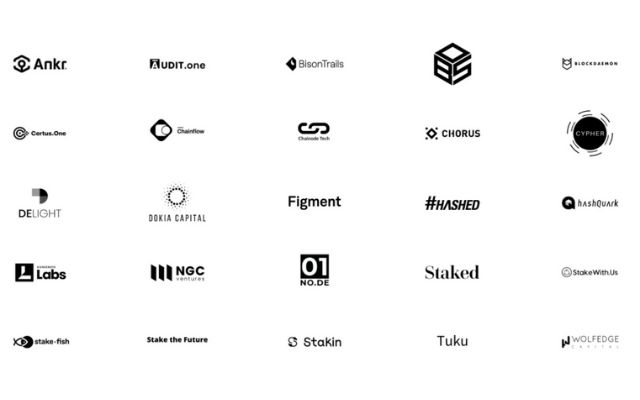 Some of the top direct supporters of the SKL coin presently operate proxies or run the SKALE node, both of which will add to the network’s security once it launches. These companies include, among others, Canaan, BlockChange, Acrew, Floogate, Wave, Visary, Spartan, HackVC, and Oyster Ventures. 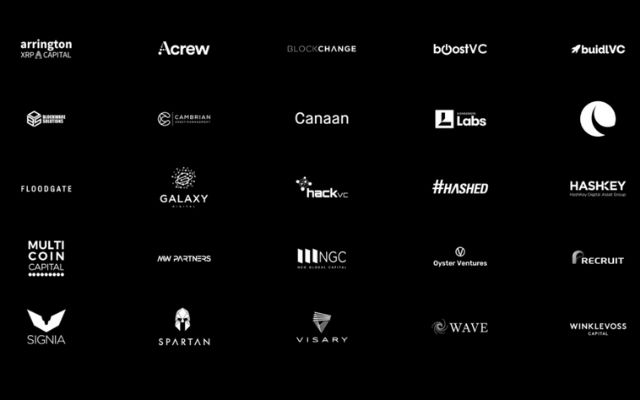 X. Where can Skale Network (SKL) information be updated?

These media are constantly updated with useful information, new activities, outstanding events of Skale Network, and all the topics surrounding it. Accordingly, Meta Lion Ventures continuously updates the topic of outstanding projects in Blockchain and hot events organized between Meta Lion & partners.

Users won’t be able to mine SKALE tokens using Bitcoin or Ethereum miners since Skale Network employs POS consensus. Users should instead think about how to become Validators or, if they lack IT expertise, how to become Stakers to earn more SKALE Tokens.

Listed on many of the world’s top exchanges, transaction speeds up to 1000x faster than Ethereum, very low transaction fees and no end-user gas fees, pooled security with random node selection and frequent button rotation, etc. are the advantages of Skale Network. However, this project still has some disadvantages such as: being heavily influenced by the price of Bitcoin, being relatively new and nascent, having to compete with countless projects to help expand and overcome the existing problems of Ethereum, etc. Investors should exercise caution when funding new endeavors because there are equal chances and risks.

The above is Meta Lion’s comment on the Skale Network project which is our personal opinion, this is not investment advice at all. Investors should be responsible for their own decisions.